Boqueron to Cabo Rojo
Tuesday, May 8: We made the short 7 mile sail (under sail) to Cabo Rojo in the afternoon, anchoring near the point in fairly rolly conditions. Up at 2:00 AM (North Star up at 4:00), and off for La Parquera and Gilligan’s Island.

Gilligan’s Island
Wednesday, May 9: On the way to Gilligan’s Island, the motor quit again, and we sailed into the anchorage. After consulting by phone with my boatyard mentor, Paul Anderson, we decided that the 41 year old, salt water cooled motor, had just filled up with rust, and overheated, causing the pistons to seize. Time for a new engine, and time to baby this one. We decided to just use it to get into and out of anchorages, and to sail the rest of the time. 29.5 nm.

Gilligan’s Island is named after a 1970s TV show. The guide books say there was a fisherman who looked like Gilligan who started a tourist business based on tours of the island. This is not where the show was filmed. Capitalist pressures have caused the island to be renamed, and most charts show its new name.

Ponce
Thursday, May 10 2:00 AM: again, we sailed off our anchor and off to Ponce (Pronounced Pon-say). We sailed the whole way, and started the engine to get into the Ponce anchorage. No luck. The engine ran for a minute, developing no useful power and then shut off. We are officially without an engine. We sailed into the anchorage, although we didn’t go very far into the harbor. We stayed in Ponce for two days, sharing an Uber with North Star (and sharing their dinghy) to get to a McDonald’s and a WalMart. Arrived 9:00 AM, 32.5 nm.

Salinas
Saturday, May 12. Same routine to Salinas. Left at 2:30, tacking back and forth to Salinas. Since we are sailing onto and off our anchor, we need to be very careful not to sail into a harbor that we can’t sail back out of again. We can sail north, south, and west, but not east. Salinas has a north-south approach to it’s harbor, and I was game to give it a try, but North Star decided to anchor outside the harbor, and that was fine with us. Salinas is reported to have good support services for cruisers, but we didn’t go ashore. Arrived 10:00 AM, 32.1 nm.

Puerto Patilla
Sunday, May 13. Same routine again: Out at 2:15, tacking all night and sailing from the south into the anchorage. We made deal with North Star offering to treat them to dinner if they would dinghy us into town. We found a nice, but hurricane damaged town. There was only one operational, but good restaurant, and had a nice meal; our last one together. Arrived 11:20, 36.3 nm.

We have a compact Porta-Bote folding dinghy which is a bit of a bother to set up and tear down. We need to drag it onto the foredeck open it up, pin three bench seats in place, toss it into the water, get oars ready, optionally installing a small outboard motor. This can take over 30 minutes to set up and 30 minutes to tear down, usually when we are tired, so often we just decide to stay on Olive Oyl and enjoy the town from a distance. North Star has an inflatable dinghy which they haul up on deck, but there is some assembly required for them too.

Cayo Santiago (Monkey Island)
Monday May 14: Same routine again: up at 2:00 bound for Cayo Santiago, a small island on the east coast of Puerto Rico. We spent about 6 hours tacking the first 7 miles. As we rounded a series of points, we were able to work the wind gradually to our starboard side, and we were finally able to sail our last leg without tacking. We sailed into the lee of a little island which still had evidence of hurricane damage. This island had been used for monkey research since the 1930s. It had been populated with Rhesus monkeys imported from India, and the social interactions of the monkeys have been studied by scientists. Our internet research indicated that the monkeys had weathered the storm and most had survived, but we couldn’t see any. We found later that they were still on the island. We were too far out to see them.  We looked out on a vista of perhaps 15 wrecked power windmills.  Arrived 12:00 noon, 37.5 nm. 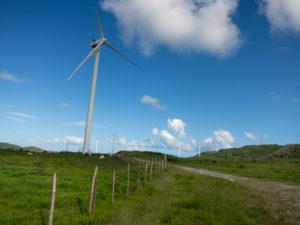 About tacking. It should come as no surprise that it is impossible to sail east into a wind coming from the east, however it is possible to sail to the northeast or to the southeast, and this fact makes it possible to sail a modern sailing vessel to windward. But there are costs, and those costs are additional distance, and reduced speed. Imagine you are at one corner of a large square room. You need to get to the opposite corner, but you are not allowed to go directly. You are obliged to travel down one of the walls next to you (either one) to the next corner, and then down the next wall to your destination. It turns out that you have to go 40% farther when you do this. For you engineers, this is the square root of 2, or two times the sine of 45 degrees. Imagine again that there are obstacles along the edge of the room that slow you down, and that the room isn’t really square, rather it is diamond shaped, causing you to travel even farther than if it was square. This is what tacking can be like. The last 4 legs of our journey have all been about 22 miles long, but the distance displayed by our electronics has generally been around 35 nautical miles. To make matters worse, our speed has been minimized by our close angle to the wind. When you are out for a daysail, tacking can be fun. When trying to get somewhere on a windy day with big waves, it can be miserable.

Marina Puerto del Rey
Tuesday, May 15: We got a late start the next day, mostly because we had difficulty identifying our next stop. We were looking for a marina we could stop at for two weeks while our son and his wife (Josh and Jen) visited us, and while we waited for a crew member (Peter Mueser) to join us. We discovered that east coast Puerto Rican marinas are VERY negative about sailboats sailing into them without engines. We were obliged to get a tow, and that tow turned out to be SeaTow for $375. Now we do have towing insurance with SeaTow’s competitor, TowBoatUS, and much of our morning was spent on figuring out how to get our company to pay the other company, and how to get towed back out two weeks later. We left Cayo Santiago around 11:00 and made it into Marina Puerto del Rey around 5:00PM. SeaTow came out and helped us in the last 1000 feet, a 15 minute job. They were very competent and specialize in making nervous boaters feel like things are finally under control. 26.5 nm. 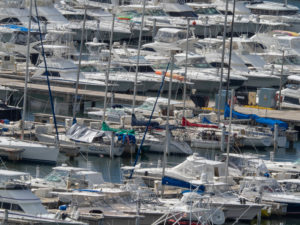 We paid for 2 weeks at $37.50 a day, and got a nice slip in a huge marina that has 1000 slips, but no pool. 4 days later, Josh and Jen came to visit. We visited El Yunque, said to be the only National Park rainforest in the USA (there is another in Alaska, which also claims to be the only one). We visited the two ancient castles in San Juan, Castillo San Felipe del Morro and Castillo de San Cristóbal. Both were huge and very old (by American standards). 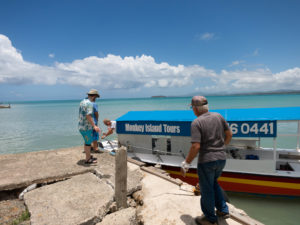 We also booked a tour of Cabo Santiago (Monkey Island) with Captain Paco, an enthusiastic septuagenarian with good English skills. There was a problem however, Captain Paco had burned his arm, and he had a lame foot, and he needed some kind of help to get his boat ready. We decided it would be fun to go and try to help him, even if we couldn’t take the tour. He was clearly an interesting guy, and it was only about a 15 mile drive. When we got there, he gave me detailed instructions about how to row out to his boat, start it (the starboard engine only), cast off the mooring, haul in the anchor, and pilot it into the hurricane damaged dock. Where he got the trust that a stranger could do this, is still a mystery. It was the first time I ever captained a boat with more than 6 horsepower, but I accomplished the task with no damage to the boat or to my pride. We took the tour, did some snorkeling at a shipwrecked barge, saw some fish and starfish. Got close enough to the beach to see monkeys and monkey support personnel, and had a conch horn blowing lesson. When we got back to the dock, Paco’s regular helper had gotten home from high school, so we didn’t need to take the boat out to its mooring. A great relief to everyone. 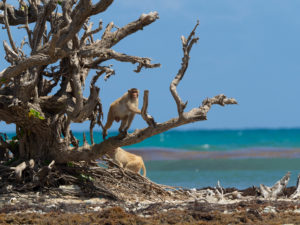 What to do about Olive Oyl’s engine. Replacing a boat engine is not like replacing a car engine. Most used engines are in no better condition than ours was before its failure. Typically, a “repower” involves installing a brand new engine from some other manufacturer, in this case a Beta Marine diesel with V-drive transmission. This is much like installing a Hyundai engine in a Chevrolet truck. It involves a great deal of knowledge, care, and hand fitting. Not, in my opinion, something that should be undertaken by strangers in a strange land, even if it is part of the USA. This endeavor is also very expensive and may cost as much as the boat will be worth after the work is done. After much discussion, we have decided to sail Olive Oyl back to Virginia, where our support network is, sans motor, taking the 1250 mile direct route in the blue water. The plan is to leave Monday afternoon, May 28th, a few hours after my highschool friend, Peter Mueser gets here to help us crew. it should take about 2 weeks. The experts all agree that the best time to make this trip in this direction is in May, so the conditions are as good as they can be. Weather info indicates that winds should vary from 20 down to perhaps 5 kts from a variety of directions, but NOT FROM AHEAD. It promises to be a civilized, if long, and possibly hot trip. Keep an eye on this blog for location reports (click the tiny box at the top of this page). We will post them daily if possible.

In the meantime, we are getting ready for our long trip. Cleaning up, doing laundry, fixing a short list of things, sealing up the chain pipes, scraping barnacles off the bottom, provisioning, and selling 15 gallons of diesel fuel.