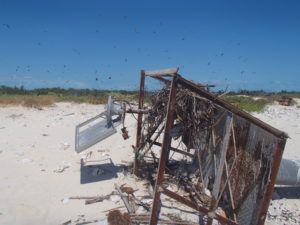 We departed in the late morning for French Cay, a short trip of 19 miles. When we got there, we went ashore and found an abandoned boat with the name of “Ser Vice Plus” and thousands of birds of 3 or 4 species, clearly nesting in the middle of the cay, and flying about, and making noise.  Initially, we thought they were disturbed by us walking on the beach, but when we got back to the boat, they still behaved the same. We walked around the whole cay which took about 40 minutes, finding some nice shells. 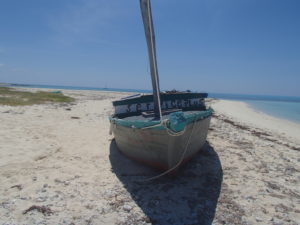 Ser Vice Plus with Olive Oyl in the background

The boat, “Ser Vice Plus” was especially interesting. It was crudely built of rough lumber, nailed together with the same kind of steel nails you would use to build a house, probably 8 d sinkers. It was caulked with what may have been standard latex caulk;  the paint was still bright.  There was only one place where I could see daylight through the hull. It looked like it would float if put to sea again. It had had a bowsprit at one time which was cut off, a short 8 foot mast, and a very crude mount for an outboard motor. A look inside revealed backpacks and lots of nice clothes and shoes, most of them children’s. My theory was that this was a refugee boat from Haiti that wound up on this island by accident or by plan. My French isn’t good enough to know the difference between Service and Ser Vice (If anyone has an idea, please post it to this blog). I did an internet search, but didn’t come up with any historical information about such a boat being apprehended or coming to grief. There is quite a large Haitian population in The Bahamas and in the Turks and Caicos. They tend to get the lower pay jobs, and there is quite a bit of animosity between legal residents and Haitian refugees, just like in the USA. Cuba, T&C, and the Bahamas are the closest countries downwind from Haiti. When we were in Marsh Harbour, an arsonist set fire to the Haitian shantytown, called Mudtown. No one was killed, but about 100 homes (shacks) were destroyed.  As a side note, it seems the Haitians receive quite a bit of used clothing from US aid organizations. The Haitian’s don’t have much, but they do have nice clothes, it seems. They even export quite a bit to the Dominican Republic. 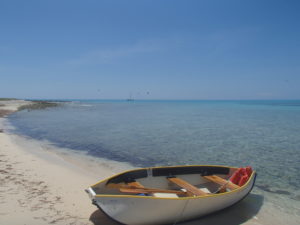 We went for a quick swim, rowed back to Olive Oyl at our quiet anchorage, did a quick internet search on French Cay, and found out that it was a bird reserve and going onshore without a permit was prohibited. Oh well, we don’t think we did it any damage.

The next morning, March 20, we got up an hour and a half before sunrise and left for our 58 mile trip across the shallow T&C banks to Salt Cay. This was largely a trip that had to take place during daylight hours, because of the potential of encountering coral heads. The chart was full of dotted lines with the words: “Unsurveyed area” on it. We didn’t have any trouble, but we draw only 4.5 feet. Most large sailboats draw 6 feet or more. We anchored at Salt Cay about 2 hours before sunset (perfect), rowed in to shore and took a look around. 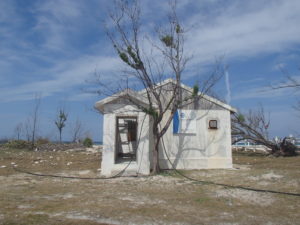 Salt Cay became one of our favorite places. It is very rough, having suffered from the two big hurricanes of 2017, Imra and Marie. Palm trees were gone. The telephone lines had been torn from the poles, and were still laying on the ground. We were told that the phone company was not going to replace these wires, requiring the whole island to rely on cell coverage that seemed to be working well most of the time. The power lines had already been replaced. 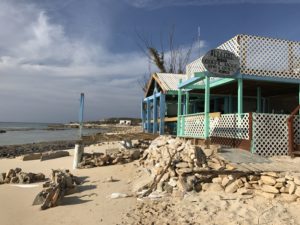 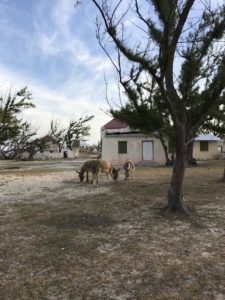 The island had also been damaged by 18 foot waves a few weeks before that came down from the recent huge storm off the coast of New England (discussed in the “Rudder Cay to Georgetown” post below). There were dozens of donkeys and cows roaming the island. Many of the homes were vacation rental units, and many were partially damaged, (mostly missing roof shingles). It seemed like it might be a buyer’s market for real estate with a view of the Caribbean. There was a single restaurant which had lost its patio in the 18 foot waves, a dive business, a whale watching business, some individual fishermen, and a few tiny stores run out of peoples homes. 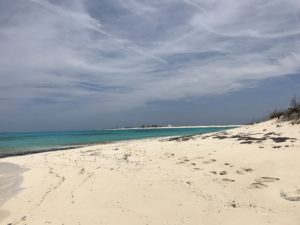 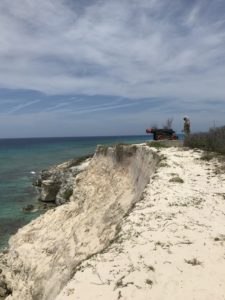 The next day, we went for a walk to a beautiful white sand beach on the North coast of the island. At 11:00 we were the only people on this 1/2 mile beach overlooking turquoise water with coral reefs within swimming distance. 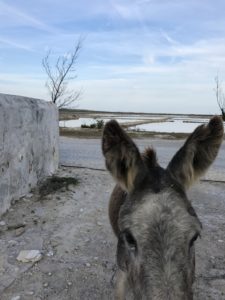 For over 200 years, Salt Cay had a huge family salt production business. Production stopped in 1955. There are still huge salt ponds separated with short stone walls. There are interesting canals, and most of the original buildings are still in place, some re-purposed. The most impressive is a huge white house that is built on top of a salt warehouse that has at least 15 foot ceilings. It is also one of the few houses in the world built with a pitched limestone (from Bermuda) roof, supported by wood frame. This roof has lasted about 200 years, and must be 6″ thick, but last Summer, the house suffered a direct hurricane hit which lifted thousands of pounds of limestone off the roof. We were standing in the street looking at the damage, and we noticed a workman up on the porch. We started talking and it turned out that he was Ian Dunn, a family member and part owner of the house. We talked for 20 minutes, and he was a fount of information about the house and history of the town. He runs a boat tour business and hopes to fix the house up, and has gotten quotes to fix the roof by putting all the good stones on one side, and replacing the other side with some kind of man-made stone substitute: many 100s of thousands of dollars. He remembers playing in the house when he was a child when it still had salt in the warehouse below. You can find more about this house by doing an internet search on “white house salt cay” 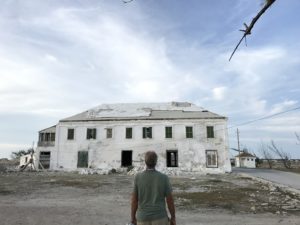 The next morning, March 22, we hauled anchor and headed out for Luperon Bay in the Dominican Republic. Humpback Whales have their calves at this time of year in this vicinity. We had until early the next morning to get to Luperon, a distance of 90 miles, so we had a few hours to spare, and we went looking for whales. We only saw one fluke in the distance and didn’t get close enough for pictures. Our overnight trip was long, but uneventful. We sailed most of the way. For a while, it looked like we might get in to Luperon before sunrise, but the wind decrease around 5 AM, and we had to motor for a bit to get in before the trade-winds picked up. We were met by the local “Papo” who helped us find our way into the anchorage and rented us a mooring for $2 a day (about 1/8 of what we paid in Marsh Harbor). With detours, this leg turned to be 107 nautical miles.