We have been reading “Passages South” by Bruce VanSant,  and one of his five rules is “plan your route flexibly”.  This is a prime example.  Last night we were anchored in Calabash Bay;  it was quite rolly, and Salli didn’t get much sleep.  The swell wasn’t forecast to improve, so we decided to stay another night in nearby Joe’s Creek.   After listening to the various weather forecasts, we pulled up anchor around 10:00 and headed for the creek entrance.  It was nearly low tide, there was an onshore SW wind,  and the creek entrance is about 4 feet MLW.  The closer we got the more this plan seemed to be a mistake, and we chickened out.  Our alternatives were, go back to Calabash,  go back to Salt Pond, or start out on our next leg East and South, and figure out our destination while we sailed.  This last choice is what we did.  As we continued on, the wind veered to the North, and conditions were good to just keep going.  We passed Rum Cay, Semanna Cay, Plano Cay , and  Crooked Island and Acklins Island. 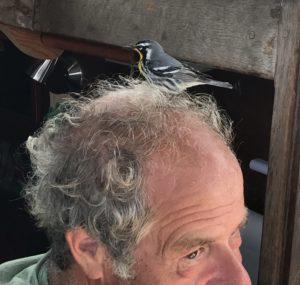 In the vicinity of Plano Cay, we were visited by a small, beautiful, tired bird which we later learned was a Yellow Breasted Warbler.  It spent 30 minutes trying to find a place to rest, and we spent that time trying to keep it out of the cabin.  It appeared to have no fear of us, but of course, it was weighing the dangers of exhaustion against the dangers posed by us. “any port in a storm”.  After a while it took off and headed West.  We got to Mayaguana after dark on the second day, and it was clear that we had good winds to take us to Turks and Caicos around dawn which is what we did.  During the night we encountered a bit of commercial ship traffic, and the winds veered around a bit to the SE, causing us to bear up to a close reach, which made us take on quite a bit of water over the bow and motorsail.  Uncomfortable,  but safe.  We arrived in Sapadillo Bay around 10:00, anchored, took a brief rest, and put the dinghy together.

Turks and Caicos is a new country, so we rowed into the beach, and walked the ¾ mile to check in with Customs at the Port of Entry shipping terminal.  Shipyard security made us show identification, and wear fluorescent vests and hardhats. 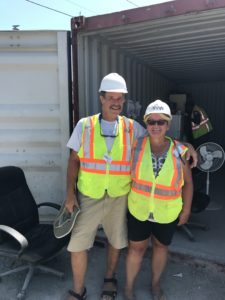 Security personnel were gracious enough to take our picture for us.  We had to clear both Customs and Immigration.   One office, but two officials.  The customs official took care of us, but we had to wait for the immigration official to return from a ship.  While we waited, the customs officer provided much useful info about our new home, specifically the currency (US dollars, they don’t print their own currency), and the Thursday night fish fry (highly recommended by everyone we talked to).   When we finished up, we walked back to the dinghy, buying 20 lbs of ice on the way, rowed back to the boat, prepared supper (barbecued chicken), and collapsed into bed.

Thursday, we rented a car, a KIA Picanto, so we could go to the Fish Fry, and do some shopping the next day.  The Fish Fry was nice, but geared largely toward tourists.  There was a band, an MC, and a traditional Junkanoo costume dance group.  There were many booths selling food and handicrafts.

Geographically, Turks and Caicos is an extension of the Bahamas with the same kind of islands and shallow banks.  Politically, they are a British Overseas Territory. As a British territory, its sovereign is Queen Elizabeth II.  At some point, T&C has made the decision to improve their economy by concentrating on tourism and offshore banking.  The result is an improved economy, but they have lost much of their island atmosphere.  The good side of this is that there is good shopping, in some instances nearly equivalent to the USA.

Friday, we took our rental car out to do some shopping, laundry, and a bit of poking around.  Sadly, we found the Conch Farm (the only one in the world) to be closed due to damage by the hurricanes last summer.  We accomplished our other tasks and got our rental car back by late afternoon.

Saturday,  a slow day at anchor, getting organized, doing blog posts, and checking weather.  It looks like we may go the 70 miles to the Turks islands in a couple days, and from there to the Dominican Republic a couple days later that that.