We spent two nights at Big Majors Spot, in the company of about 55 other boats, and moved on to Black Point Settlement on February 21.  The wind was blowing at 20 knots from the east.  We were able to sail for the first hour, and then had to motor almost directly into the wind.  There was some 2 foot chop at the worst, which brought quite a bit of salt spray on-board.  Sailing on the banks here is a lot like sailing in the more shallow parts of the Chesapeake Bay. 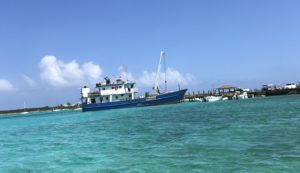 Black  Point is about the same size as Staniel Cay, but with less commercial activity.  Thursday, we took a short walk to see some blowholes, and a limestone arch.  We got free water near the government dock, and went to happy hour at Scorpios, with a bunch of other cruisers.  The bartender was quite liberal with the rum.  My theory is that, in the Bahamas, rum costs less than fruit juice.  We were strongly advise, by other cruisers, not to drink more than three. 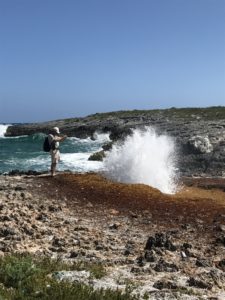 Rockside Laundromat has 10 new washing machines, 2 showers, a small convenience store, and a dock.  Salli says it is the cleanest laundromat she has ever been in, even in the USA.

Leave a Response to David and Alison Cancel Response