This adventure was Angie’s idea.  There were three boats on this trip:  Olive Oyl, Alibi (Angie) and Moondance (Barbara and George).  This was a leisurely sail with the objective, a bonfire on the beach with a potluck meal.  15.7 miles.

Tilloo Bank to Tilloo Cut:  In the morning, we headed up the west coast of Tilloo Cay.  Moondance had trouble getting her anchor chain on board in the windy conditions.  Eventually, they succeeded, but decided they should go back to their slip in Marsh Harbour and straighten out the chain issue before anchoring out another night or two with us.  We had double reefed Olive Oyl, and were using only a single jib while all this was happening. We were having fun sailing around in circles on a windy day with no immediate objective when our staysail started flapping.  Investigation showed one of the upper seams had ripped out, leaving an unusable sail, but with no serious damage.  Angie has a Sailright sewing machine, so we took our sail down to be sewed up again when we got back to Marsh Harbour.   Olive Oyl and Alibi continued North a short way (2.5 nautical miles) to an anchorage South of Tilloo Cut.  We dinghied to Angie’s secret location where we caught several large Conchs. 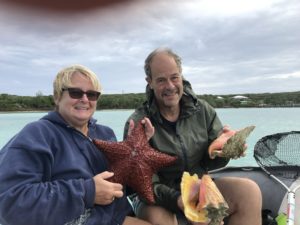 We ate the conchs and threw the starfish back.

Back to the boats for Conch preparation and Conch supper.  Doug:  thumbs up!  Salli: not so much.

Tilloo Cut – Tahiti Beach – Hopetown.   A very short sail to investigate Tahiti Bay and Tilloo cut.  The objective was to do some snorkeling and possibly bagging some lobsters (called crayfish down here).  Wind and waves were too much, so we anchored at Tahiti Bay and did some beachcombing.  Doug: found a couple natural sponges for the dinghy.  Salli: some shells.  Next to Hopetown where we anchored south of the harbor near a small abandoned resort.  More lobstering, but we only found a single tiny one.  The main way to hunt lobsters is with a spear and an elastic band.  As we see it, the main drawback of this system is that you can only check the size of your lobster once it is dead.  If it is too small, there is no way to release it alive.  There is another clever way which is to use a string mop.  Yes a mop.  You find the lobster hiding in a hole with it’s antenna sticking out.  You thrust the mop into the hole and twist it around a bit, causing the lobster, with it’s antenna, legs, and sharp shell to get snarled up in the mop.  Withdraw, untangle and put into your bag.

Hopetown back to Marsh Harbour:  8.5 miles.