Finally leaving Marsh Harbor, Abacos to go to Spanish Wells Eleuthera:  Originally we intended to do this as two long day sails, anchoring overnight near Little Harbour.  The wind Thursday was forecast to be 15+ knots and Friday to be light and variable.  We sailed (with sails) from our anchorage in Marsh Harbour, all the way to Little Harbour, which took us until mid afternoon.  We decided to keep sailing for two reasons:  1) We wanted to take advantage of the wind Thursday rather than motoring on Friday, and 2) We would arrive at our destination in the morning with no chance of arriving after dark,  allowing good visibility to negotiate a shallow approach.

The sail from the Abacos to Eleuthera involves going through a cut (in this case Little Harbour Cut) into  the Atlantic Ocean for 50 nautical miles, and back onto the Eleuthera bank  near the more protected Egg Island.  There are two considerations:   We have been navigating on the Abaco banks for two months where the depth is seldom deeper than 12 feet.  This reduced depth also means the waves can only get so big.  In the Ocean, the depth is greater (3500 feet in this case) and waves can get much larger.  In addition, when transitioning from the banks to the ocean, we have to go through a cut, where current, wind and waves sometime conspire in unforeseen ways.  In any case, we got a favorable forecast, and talked to a boat that was out in the ocean, and we decided to go for it.  To make a long story short, we encountered 5 to 6 foot waves in the cut, and waves gradually decreasing through the night. 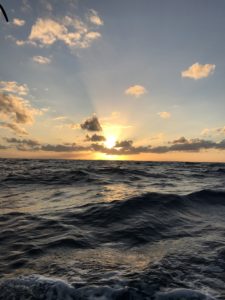 We kept short 2 hour watches and both got some sleep during the crossing.  As we approached Eleuthera, the wind started veering (moving to the right), so we couldn’t maintain our direct course.  When the sun rose in the morning, we were 10 miles from Egg Island with calm seas.  We started our engine and motored two hours to Egg Island, and another hour and a half to Spanish Wells to anchor just west of their harbor,

We rather liked Spanish Wells.  People were very friendly.  When we stepped ashore, we were looking around trying to decide what to do first, when an elderly gentleman approached us in a golf cart and offered to give us a tour of the island. There would be no charge.  We climbed aboard, and he (Captain Edison Byrd) gave us a tour of the islands two main roads from one end to the other.  He told us a bit of the history of the island, and mentioned that during WW II, Bahamians were agricultural work in the US to take the place of farmers that were fighting in Europe and the Pacific.  As we passed one shop Capt. Byrd told us that his daughter worked there.   He is 91, has lived in Spanish Wells his whole life, and a retired sea going captain.  He has spent the last 18 months giving visitors free tours and general transportation.  His daughter later told us: “He can drive and he can talk”.  This was a great introduction to Spanish Wells.  We ran into the Captain two more times, each time he told us about going to Wisconsin and doing farm work. 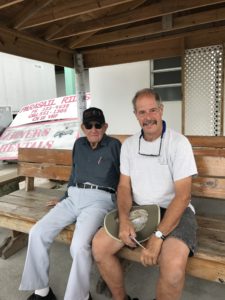 The primary industry of Spanish Wells is fishing, mostly crayfish (spiny lobster) fishing.  It is apparent that they make good money doing this, as the boat gets $12 a pound for their catch.  There is a marina , a mooring field, and a boatyard, but there is very little attention given to amenities for cruisers.  There was no specific dinghy dock, but one clearly gets the impression that folks are quite reasonable, and for the most part, don’t really care where we dock.  One afternoon, during a full moon, we went back to our dinghy and found it way below the dock riding on an especially low tide.  I was able to get into it, but Salli, being much shorter was wisely unwilling to try.  No problem, I will take the dinghy, and we will find a place with a long ladder to get her on board.  Unfortunately we were unable to find one nearby.  A local man seeing Salli, asked to help, offered to take her in his car to the other end of the town, and when she deferred, went anyway in search of a good location.  Another man suggested that she climb down on a nice looking motorboat that had a platform just perfect for boarding the dinghy.  Salli asked him if it OK, and he said “use this boat”.  She asked if it was his boat, and he said again: “I’m telling you to use this boat.” And he helped her to get on it.  The implication being: “I don’t know whose boat this is, but this is Spanish Wells and no one will object to a stranger crossing his boat to get to his own boat.

We spent several days here, met two visiting couples with an astonishing number of things in common with us, Took the high speed ferry to Harbour Island, a Bermuda-like tourist stop with a spectacular beach, 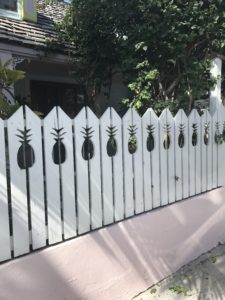 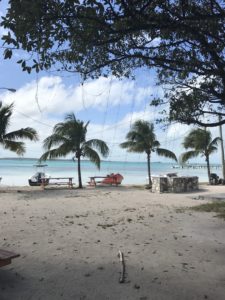 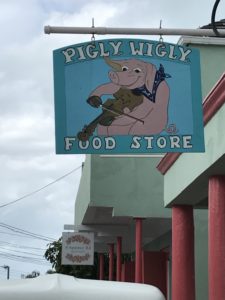 and shopped in the excellent Spanish Wells hardware stores.