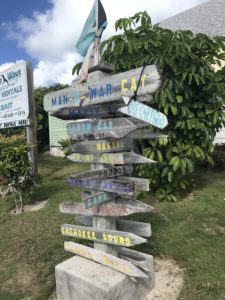 Wednesday, December 27,  We left Green Turtle Cay bound for Man-O-War Cay,  two hours after low tide, and got out of Settlement Creek without touching bottom.   Shallow draft vessels can take a fairly direct route, but deeper vessels must go out into the Atlantic, briefly, to go “around the Whale”  We probably could have taken the shorter route, but the longer route was only a couple hours longer, and conditions were favorable for playing it safe.   We got to Man-O-War Cay, anchored outside the Harbor and went into town where a fellow named “Mack”, told us where the dinghy dock was and where we should eat (Hybiscus).  Man-O-War is a Loyalist town where much of the economy is based on boatbuilding and repair.   We found a restaurant, ordered a pizza, walked around a bit and headed back to the boat.  We had outboard trouble, and before I had time to do any troubleshooting, Mac showed up in his small fishing boat, and towed us back to Olive Oyl.  It turned out that the fuel hose had come loose from the engine, a simple fix.

Thursday, we went ashore again for a walk around town, and to mail a postcard.  We were told that the post office was only open one hour on either Tuesday or Thursday.  Lunch at Hibiscus, Showers, Laundry, and Dinner at the Marina.  Back to Olive Oyl, planning to leave for Hopetown the next day.