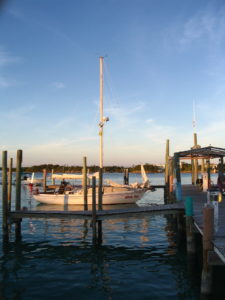 Thursday morning we set sail across the Gulf Stream, a trip that was uneventful.  4-5 foot waves, enough wind to sail about halfway across.  Dolphins, Flying Fish, and small Portuguese Man-of-Wars (Men-of War?) We got to the Little Bahama Bank after dark in the vicinity of  White Sand Bank, where we decided to anchor rather than continue on overnight.  Our anchorage was a bit rough, since the wind, current, and waves were all from different directions.  It made sleeping a bit rough, although not impossible.  We found out later that there was another boat, Aine (pronounced Anya) that was anchored nearby the same night.  We saw their green light, but thought it was from a vessel underway.

Friday, we sailed toward Grand Cay and started motor sailing around Noon, so we would get in before sunset.  Most of the trip was in 20+ feet, but the last 10 miles were less than 12, some less than 8.  Clearly a time to pay attention to detail.  Using Navionics SonarChart, we made it into the harbor without any trouble.  We talked to a couple fishermen, and tied ourselves up to the deepest, biggest slip in Rosie’s Marina.  No one contested our decision, so there we stayed all night.  We found a thriving fishing village,  half fishermen and half fishing trips for tourists.  There was one other sailboat (Aine) at anchor.  I must say Olive Oyl looked unusually, good tied up to a simple dock with no other sailboats in sight.

We cleared in with Customs, Immigration, and Health, all the same person, rather informal.  Did we come from anywhere that had the plague?  No.   We had dinner at Rosie’s Restaurant (Chicken, Conch or Lobster), Got our phones working on the Bahamian phone system, surfed the web a bit at slow speed, hoisted our Bahamian flag, and called it a night.

The people are very friendly and clearly do not see a lot of sailboats, at least at this time of year.  No one tried to sell us anything.  The water is very clear, allowing one to see to the bottom when the sun doesn’t reflect too much.  Navigation is done largely by sight by the experienced (nearly everyone but us) .  We can see every fish and beer can on the bottom of the marina.  I reflect on those times, I dropped some important piece of hardware overboard while in Virginia, to be left there forever.  Here, you would simply go in after it; the water temperature is 70 degrees F.